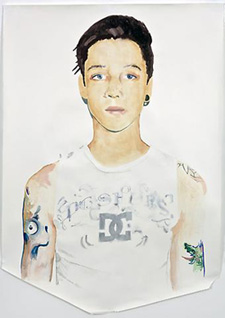 As the Hollywood Reporter recently pointed out, LA’s art scene has been largely dominated by the Hollywood film industry as of late, and that notion couldn’t be more apparent than in this week’s batch of celebrity-themed gallery shows:

-Opening at the Gagosian in Beverly Hills, filmmaker Gus Van Sant and this year’s Oscar host (and nominee) James Franco will be jointly exhibiting a mixed media show of paintings (like the one to the right,) videos, and other art. The two reportedly came up with the idea back in 2008 when they worked together on the movie Milk. [LA Times]

-SoCal natives and Black Swan tutu designers, Kate and Laura Mulleavey of Rodarte, will present a collection of costumes designed for the film, as well as more than 20 pieces from their recent fashion shows, at the MOCA Pacific Design Center in West Hollywood. “The exhibition will explore the transitional states of garments and examine them as vessels without bodies,” said Laura Mulleavy in a press release. [MOCA]

-Finally, at the LACMA, Elizabeth Taylor in Iran, featuring photographer Firooz Zahedi’s images of the Hollywood icon during a pre-revolution trip to Iran, will be on display through June. Zahedi told the LA Times that the actress was doing “much better” since her recent hospitalization for congestive heart failure. [LACMA]